"A Few Words of Explanation"

"A Few Words of Explanation

One year, during my senior-graduate course in the History of English Drama, Folklorist Richard Chase came to our campus for lectures and demonstrations. He suggested that we do an authentic English Sword Dance. Since these dances were a part of the development of the drama, I was happy to work with Mr. Chase. These photographs, properly labled and in order, tell the story of the dance.

Eleven characters are necessary-- a piper, six dancers, a clown, an old man, a horse, and a doctor. The comic effect is obvious and was proper for such capers on the village green.

I cannot recall the identity of all the dancers but they may have been identified in the school paper of the DEMOCRAT [Watauga Democrat]. I do know that Talmadge Houck was the clown and was later Lieutenant Commander (I think) in the navy. Eugene Byrd was the old man and Lawrence Atchley (?) the doctor. The horse was either Edward Hamric or Neil Hartley.

Anyway here are the photographs of what proved to be an innovative and very popular performance.

Frame from a series of photographs of an English Sword Dance performed on the campus of Appalachian State Teachers College. From AC.114: W. Amos Abrams Papers, 1884-1984, undated. 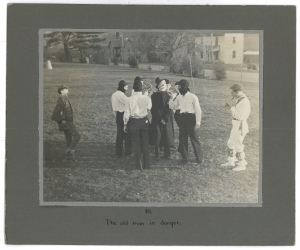 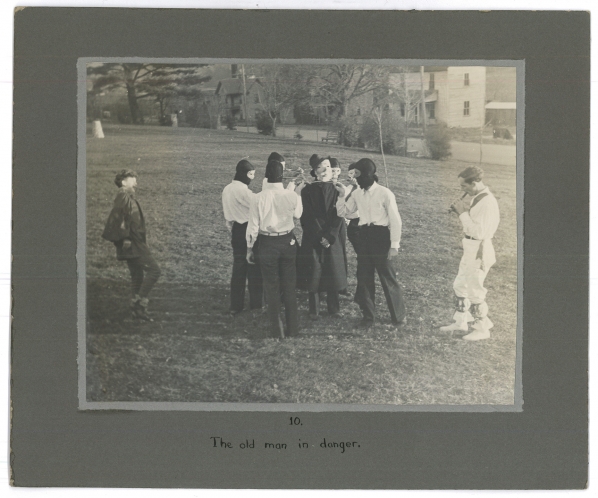