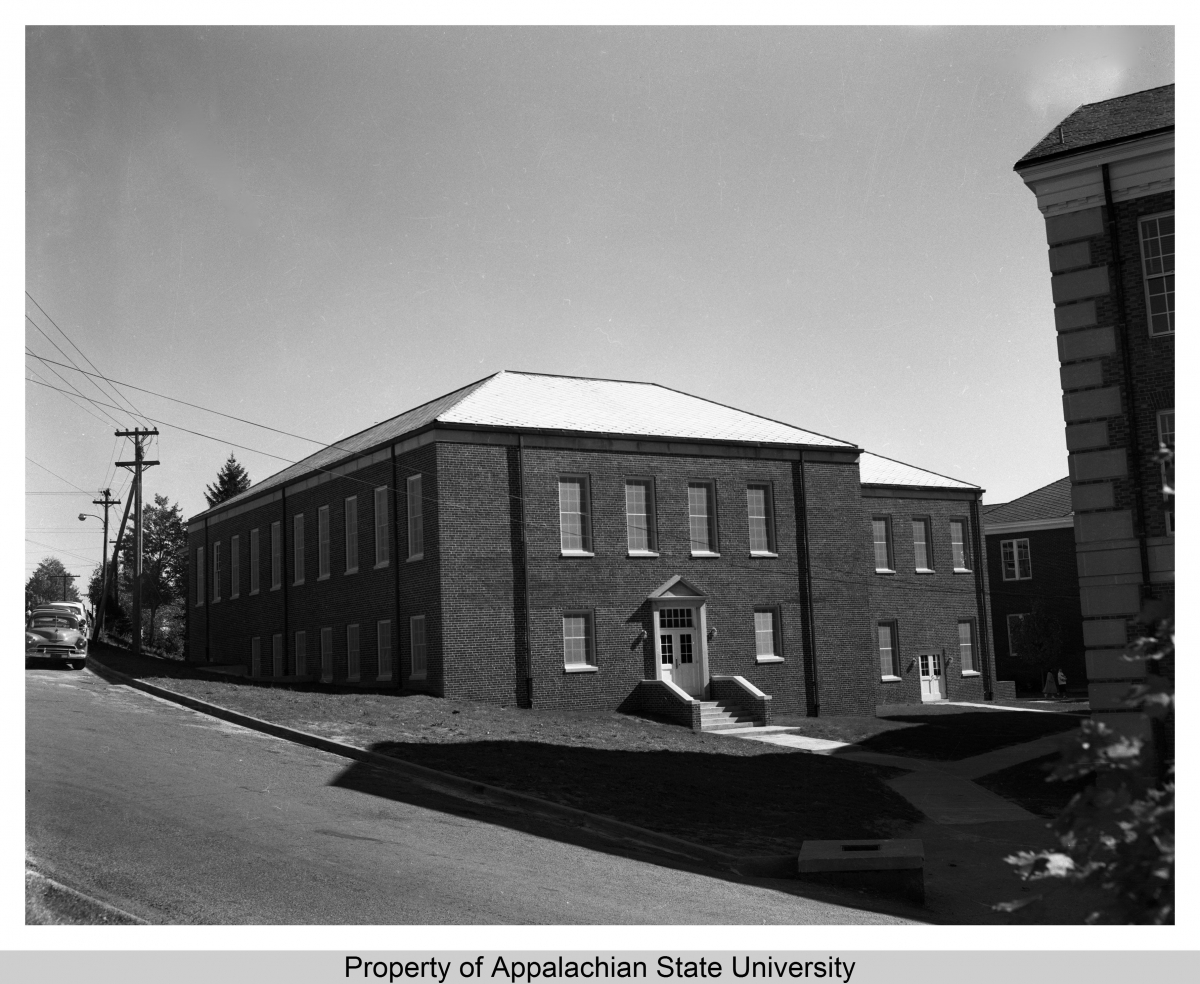 This image shows the southern (rear) side of D. D. Dougherty Library, built 1935, at Appalachian State Teachers College (1929-1967). The building served as the campus library for Appalachian State from 1935 until 1969 when the first Belk Library opened (https://omeka.library.appstate.edu/items/show/9355)

“Thirty-Second Commencement To Be Held May 3rd at A.S.T.C.,” a bold banner headline on this week’s issue of The Appalachian student newspaper, introduced an article which detailed that, “[f]rom this years (sic) enrollment of one thousand and twenty students, seventy-nine four-year seniors and sixty three two-year Normal school graduates will receive their diplomas.” “Heretofore it has been the custom,” reported the story, “for the two year Normal graduates to dedicate something to the college and this year will be no exception. May 2, just at sunset a tree will be given by these students to the college.”

“Seniors Class Present Play in College Chapel,” read another front-page headline. “Tonight, at 8 O’clock in the College auditorium the senior class will present a three-act play, ‘Captain AppleJack,’” reported The Appalachian. “The play is very humorous and promises to be very entertaining,” according to the article’s anonymous author. “The cast is made up almost entirely of experienced actors. Many coming from the Playcrafters organization. With Frances Mull playing the part of a Russian dancer, opposite Winston Rankin as a ‘Respectable Bachelor,’ unexperienced in the love making art.” Asks the article, “[w]ho could help but enjoy the love scenes?” 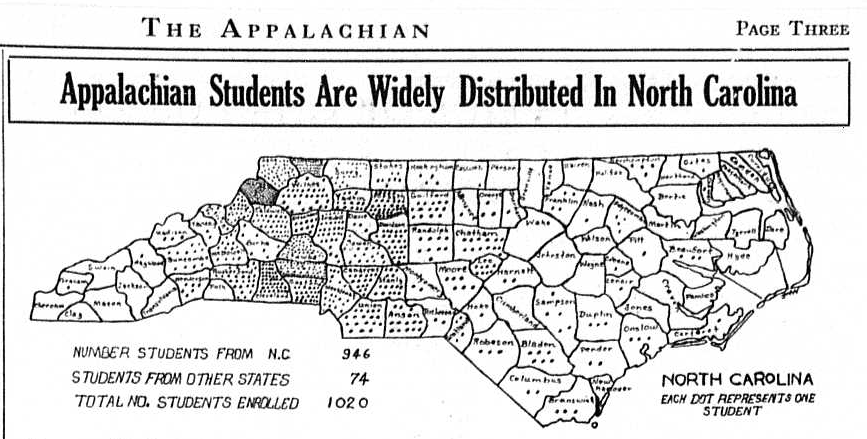 A graphic included in the May 2, 1935 edition of The Appalachian student newspaper published at Appalachian State Teachers College shows the many counties from which the institution’s students of that year came. 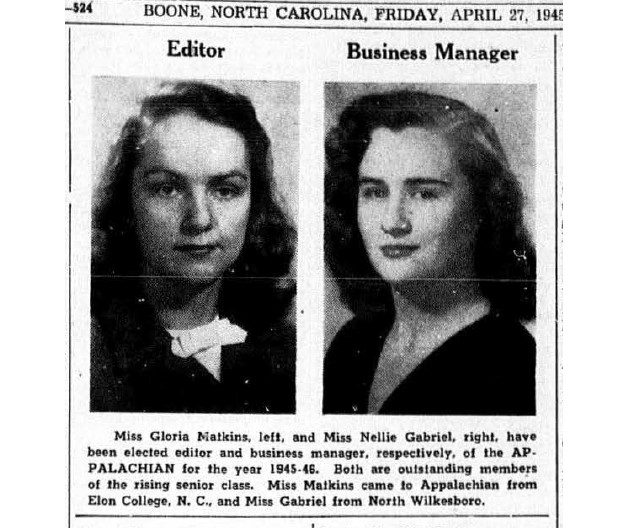 The final edition of The Appalachian published in the last academic year during World War II announced, “Ramsey To Be Graduation Speaker: Editor Of Asheville Citizen To Address Seniors.” In commencement news for this year, the article told that, “[g]raduation exercises for the thirty-four graduates will be held Wednesday morning, May 9.” A program for the planned exercises included the musical pieces “War March of the Priests” by Mendelssohn, “Victory Hymn,” attributed as “arr. by Wick College Chorus,” “Hallelujah Chorus for the ‘Messiah’” by Handel, and “Recessional: Largo by Handel College Orchestra.” Also among the program items were the “Address” by “Mr. D. Hiden Ramsey, Editor Asheville Citizen,” and “Conferring Degrees and Awarding Diplomas” by “Dr. B.B. Dougherty.” This year’s graduating class was significantly smaller than the number of seniors and normal school graduates a decade prior, as many college-age men and women were serving in the United States Armed Forces in the global conflict of the Second World War. A final note on the commencement included the honored marshals for the ceremony. “Those acting as marshals are: Ellen Philbeck, chief; Nellie Gabriel, Freda Grubbs, Clara Rutledge, Rosalyn Francis, Marie Hudler, Jean McCollum, Phylma Swain, and Bonita Rominger.”

Junior marshal Nellie Gabriel was also mentioned in another front-page feature which announced that, “Miss Gloria Matkins, left, and Miss Nellie Gabriel, right, have been elected editor and business manager, respectively, of the APPALACHIAN for the year 1945-46. Both are outstanding members of the rising senior class. Miss Matkins came to Appalachian from Elon College, N.C., and Miss Gabriel from North Wilkesboro.”

Materials for this article are taken from the digitized archives of The Appalachian student newspaper, available free, online, at:https://omeka.library.appstate.edu/collections/show/23… and from the Appalachian State University Historical Photos Collection (https://omeka.library.appstate.edu/collections/show/10), a part of the Digital Collections of the Special Collections Research Center of Appalachian State University.Compiled by Ross Cooper, Public Services Assistant 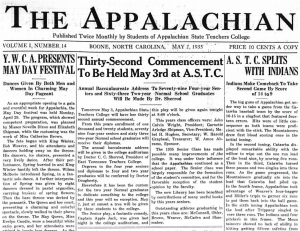 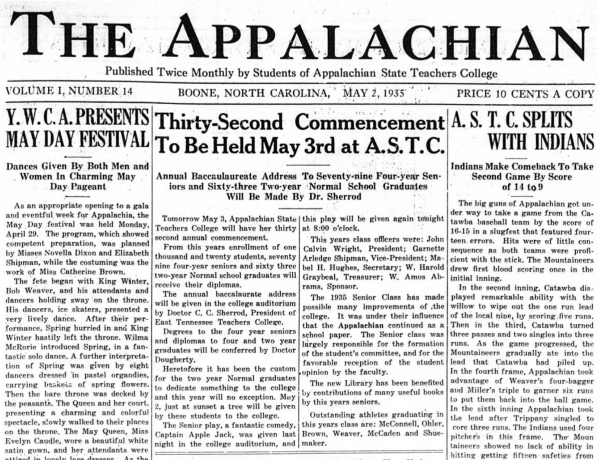