The continued story of Appalachia remains firmly connected to the history of the growth and evolution of rural America. From generation to generation, farmers within the region have balanced the growing and raising of crops and livestock for their own subsistence with a strong involvement in the wider sphere of commercial agriculture. One of the most engaging examples of the constant link between heritage and economics is represented in the breeding of cattle. Just as familial ties and last names are important in the daily commercial interactions of many Appalachian communities, the knowledge and recordkeeping concerned with tracing bloodlines of cattle still allows for the same sort of ordination and nominal weight at auctions and markets throughout the region.

Sharing relatively the same geographical origins of many of the earliest mountain settlers, Hereford cattle first emerged as a distinct breed around the vicinity of Herefordshire, England sometime around the 17th Century. Characterized for their bulky build, red body, and white face, the breed became further solidified in its attributes during Britain's Industrial Revolution as farmers selectively bred cattle for higher beef yield to export and feed the growing non-farm workforce. Although three Herefords were brought to Kentucky by Henry Clay in 1817, the breed truly became seated on the continent with the herd developed by William Sotham and Erastus Corning of Albany, New York in the 1840s. The "Jr. Modest Lamplighter 4" pictured above is an example of one of the prime Hereford lines proliferated across America. A 1949 edition of The Polled Hereford World names descendants of the Lamplighter pedigree on farms in the vicinties of Lewisburg and Washburn, West Virginia.

Image from AC.876: Paul Weston Photographs, 1966. For anyone interested in finding out more on the early history of Herefords and the society who produced them see James MacDonald and James Sinclair's "History of Hereford Cattle" (1886). 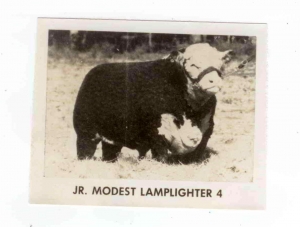 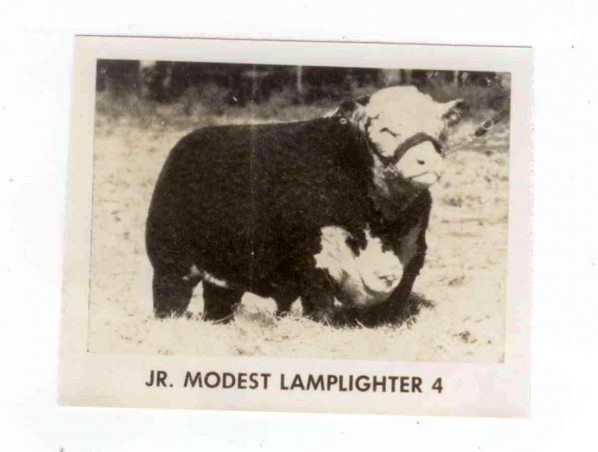