While processing the Athletics Council records (UA 65), I unexpectedly found a glimpse into the history of women's athletics at Appalachian State University.

In March 1965, a study was conducted to test the feasibility and necessity of women's intercollegiate sports being added to the athletics programs. In November 1966, the questionnaire results showed that 94% of the 452 women enrolled at Appalachian supported women's sports and 6% did not.

The budget proposal is fascinating when compared to modern costs. The bare minimum was spent, with $1.00 allocated for each meal. The creators of the proposal produced the document under the directive to keep the budget under $1000. Ultimately, it was not a goal that could be met. In spite of the $1.00 meals, once transportation was factored in, the cost was closer to $2000. 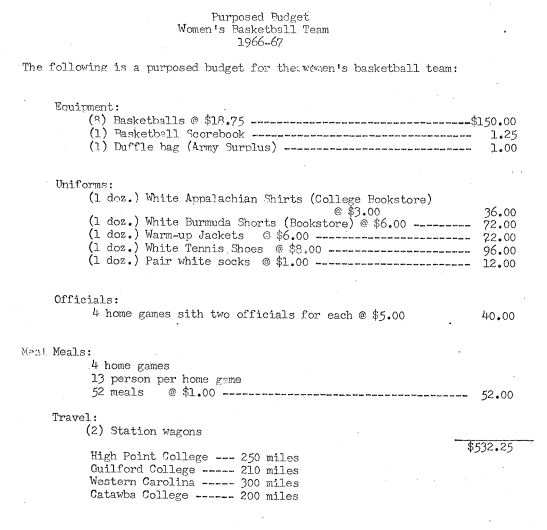 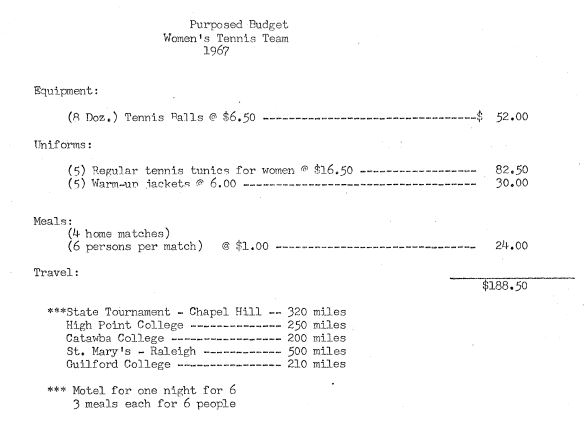 Shortly after, women's intercollegiate tennis and basketball were added to Appstate's sports programs, several years ahead of the national adoption of Title IX. Title IX was implemented in 1972 and provided equal access to sports programs. The adoption of Title IX resulted in other changes to the female student population's culture. Some of those changes included communications detailing the selection of a less offensive name than the "Mountaineer Babes."

The timeline for Women’s Athletics documented in the Athletics Council Records is as follows:

December 11, 1964 - Mr. DeGroat (swimming coach) presented a proposal to have women swim on the varsity swimming team. Discussions concerning women's place in intercollegiate sports began. Actions were recommended; the chairman conferred with the Dean of Women for approval of experimenting with coed competitors in swimming, contingent on the Secretary conferring with the Chair of Physical Education, about the possibility of a study.

September 30, 1965 - A memorandum to the Athletics Council Chairman from W. H. Plemmons outlined recommendations developed by the athletic committee. The document uses the phrasing "problem of women's athletics" to describe the agenda item.

November 2, 1966 - A memorandum went to the Chair of Appalachian Athletic Committee from Rebecca Tomlinson, with a proposal to have intercollegiate women's sports programs - basketball and tennis. Games would be played on Saturday afternoons to not conflict with men's sports.

Viewing this tangible example of App State's institutional growth and realizing that a woman was able to travel to space in 1963, before being included in intercollegiate sports was a puzzling moment that almost seemed unrealistic. If you would like to view this collection,make a research appointment here. 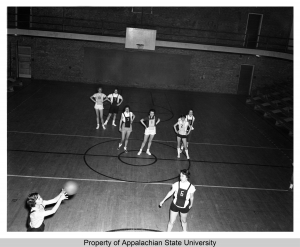 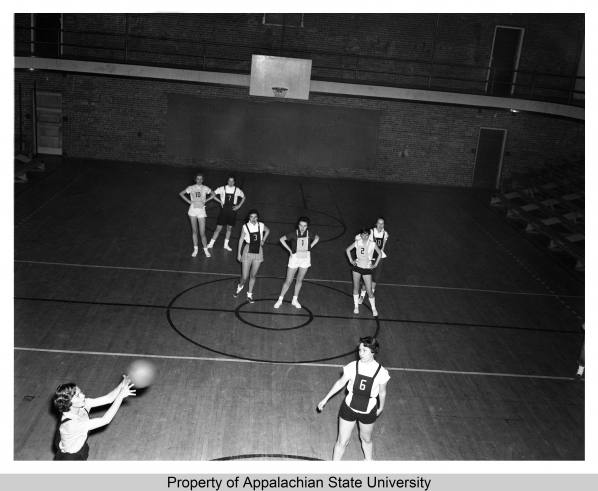