Among the most eye-catching of the items in the Rhinehart Rare Book Room on the 4th floor of  the Carol Grotnes Belk Library and Information Commons are two small pages of an illuminated manuscript.  The two leaves, measuring approximately 5 inches by 3 ½ inches,  are framed and on display in the Room’s exhibit case. The set was acquired by Appalachian State University alumnae and collectors Bill and Maureen Rhinehart who donated the leaves to join the rare book collection on British Studies, also housed in the Room.

(Read more about donors Bill & Maureen Rhinehart and the Rhinehart Rare Book Room at this link).

The leaves are from a medieval breviary (prayer book) following the British Sarum Rite liturgical usage. In addition to being examples of the art form of the illuminated manuscript, the origin and purpose of the work from which these two small leaves are taken sheds light on the often-intersecting streams of religious devotion, artistic outpouring, patronage by the wealthy and powerful, and aspiration for life beyond this mortal coil which may be seen as part of the story of the human experience during the time and in the place in which it was created.

The “Sarum Rite” is a term given generally to the texts and accompanying ritual practices which guided the public Christian worship of later medieval England, centering on the city and diocese (bishop’s principal city) of Salisbury in southern England. Sarum is a variant name of the city of Salisbury, which is located in an area of southern Britain and has been inhabited by humans since earlier than 3,000 B.C.E., according to the extant archaeological record. The monolithic Stone Age ceremonial center of Stonehenge rises from the Sarum plain, only ten miles or so away from the current site of the Cathedral of Salisbury. There is often a distinction made between “Old Sarum” and “New Sarum,” as the location of the cathedral (and, subsequently, the main area of settlement) was moved from one site to another during the thirteenth century.

The particular local variety of liturgical usage which grew up in the cathedral city of Salisbury, the “Sarum Rite,” became immensely important throughout England during the later Middle Ages, and was influential over an area much wider than the city and environs that gave the rite its name. The Sarum Rite, of which these two leaves are a remnant and a testimony, were a large influence on Reformation figures such as Thomas Cranmer, Archbishop of Canterbury during the reign of King Henry VIII and of his heir, Edward VI. Cranmer used the Sarum Rite customs for such services as Holy Communion and the daily round of offices of prayer as the basis for the first Book of Common Prayer of the Church of England, first published in 1549.  The Book of Common Prayer, still in use today, has had enormous impact on the culture, thought, and literature of the English-speaking world.

During the earliest centuries of the Christian Church, forms of worship were developed and fixed in tradition. This Christian tradition combined elements of public and private worship developed from antecedents within the Jewish tradition, from which Christianity emerged, with new ceremonies and emphases which expressed the new theology and world-view of the first followers of Jesus. As time went by, certain elements which had been central to the worship of the Jerusalem Temple and to Jewish synagogues spread throughout the then-” known” world and became a permanent part of Christian daily, seasonal, and annual worship.

The praying or singing of selections from the Psalms of the Old Testament, along with other biblical readings and hymns, either based upon biblical texts or composed by writers through the centuries, became the major components of the regular daily worship in cathedrals, smaller churches, and monastic foundations for both men and women. The “Divine Office,” as it came to be known (also known in later times as the “Daily Office'' or the “Liturgy of the Hours”) sought to sanctify the recurring pattern of time by offering up sung praises at morning, evening, and several points through the day and night. Beginning with the earliest gatherings of monks and nuns in the deserts of Egypt, Israel, Syria, and other parts of the Middle East, this round of prayer became a key part of the daily work and lives of those living in the Middle East and Western Europe during the Middle Ages, circa 430-1000 A.D.

Interesting Features of the Manuscripts

The leaves on display in the Rhinehart Room exhibit case are but two from what would have very likely been a work of considerable length, compiling numerous texts for use in worship drawn from biblical and other sources, and produced at considerable cost of labor and material, despite the relatively small dimensions of the book itself. It is possible that the small dimensions of this example indicate that it was created and intended for private use as a “Book of Hours” for a wealthy or noble patron of a monastery.

Among the arts and labor undertaking in monasteries, in addition to the observant singing or chanting of these hours of prayer, was the creation and preservation of the texts needed to properly carry out the services of the Divine Office. The recent novel, The Lost Book of the Grail by North Carolina author Charlie Lovett presents a likely, if fictionalized, account of how a beautiful and durable illuminated manuscript for church use would have been painstakingly crafted, with great care, attention, labor, and expense, by medieval monks. From the selection and preparation of an animal hide to be used as long-lasting parchment to the creation and preparation of inks, paints, and gold leaf for accent, the creation of just the two pages on display in the Rhinehart Rare Book Room display would have been a long, arduous task, but one carried out with the greatest attention as a sacred work. (View an online video about the creation of medieval manuscripts at this link: https://guides.library.appstate.edu/c.php?g=536742&p=3805295).

The two leaves on display seem to be an excerpt from a Sunday or Feast Day “office” or service of prayer, in which abbreviations for the psalms or hymns to be used (in black ink) are interspersed with the rubrics, or instructions for priests, singers, and other officiants and celebrants. The rubrics are the words in red ink, and, in fact, this type of usage is the origin of the modern word “rubric”: a marginal or parenthetical instruction, clarification, or rule, originally written in red (from the Latin word rubrum, “red”).

In addition to the differences of ink coloration, the pages also give evidence of the decorative flourishes which mark the type of manuscript called “illuminated”: a large, decorative letter “D” in the middle of the first (left-hand) page at the beginning of the word “Deus” (God) is an example within the text, as are a delicate red ink border along the left edge of the same page (part of which encircles and accentuates the letter “D”), and the large ornamental figure of a horn or stylized musical instrument from which growth of viney plant life is portrayed as springing out, above and below. 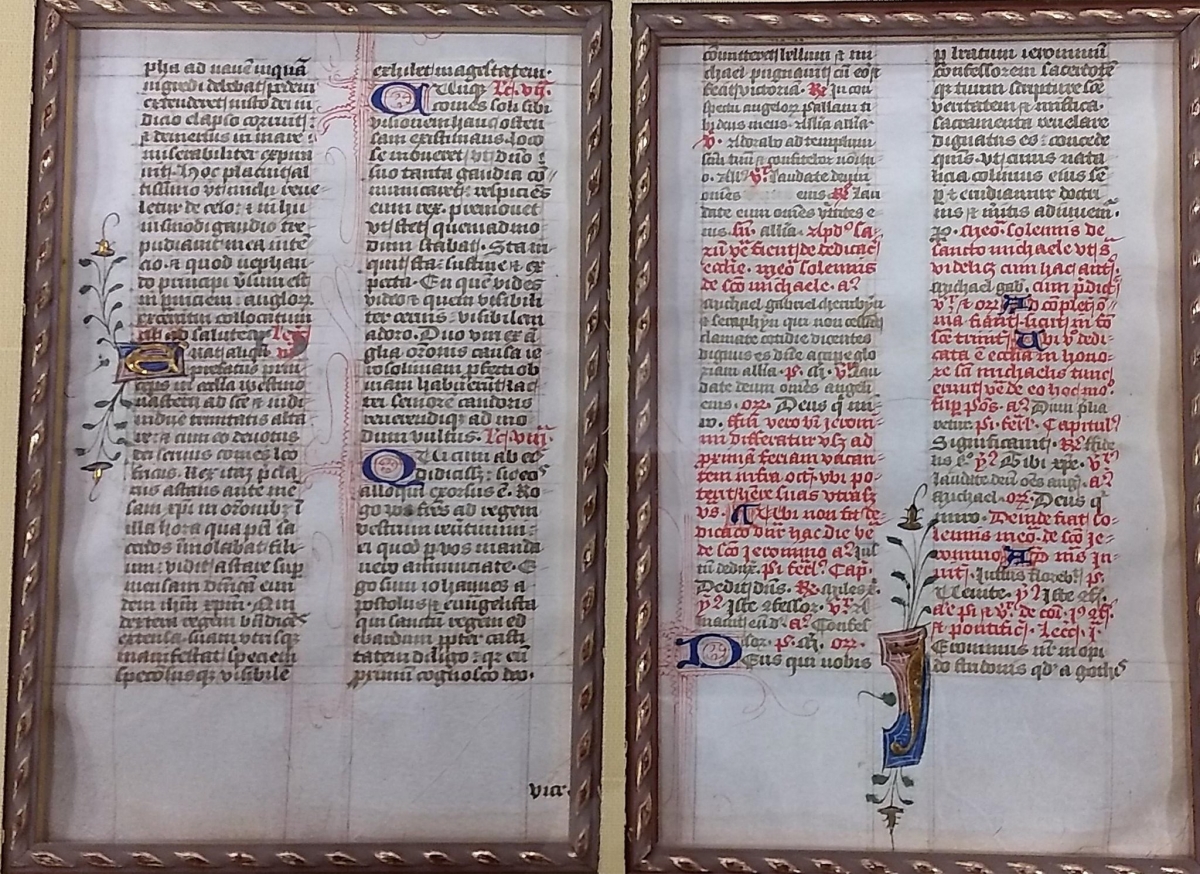 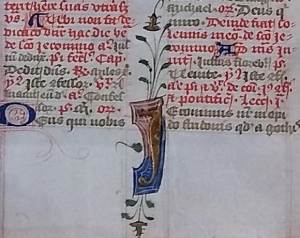 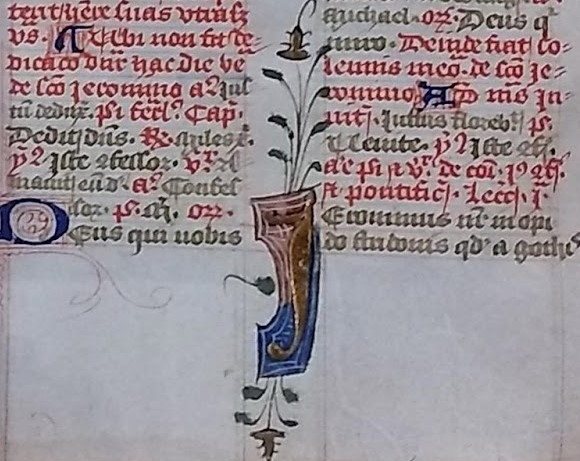