Bill Rhinehart received both his Bachelor of Science and his Master of Arts degrees from Appalachian State University. His education continued beyond his Masters with remedial education certifications from the University of Chicago and the University of Miami. Mr. Rhinehart also earned his certification in teaching learning disabilities as well as his certification for school administrators at Hofstra University. His formal education has also included studies in the history of French and English furniture designs from Parsons School of Design in New York City as well as studies in British history at Hofstra and Columbia Universities. 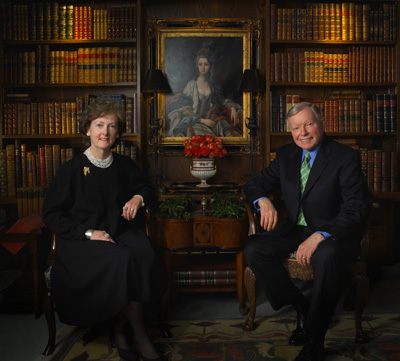 Mr. Rhinehart retired in 1994 as a school principal in Syosset, Long Island, NY, after enjoying a rewarding career as an educator, administrator, and consultant. His valuable work has spanned the globe, including positions in New York as a visiting lecturer in the School of Education at Southampton College of Long Island University, the Coordinator of Elementary Language Arts and Developmental Learning in Syosset, Long Island, as well as Adjunct Professor in the Graduate School of Reading and Education at Hofstra University. In addition he has served as a reading consultant to the Greenwich Public Schools in Connecticut as well as a consultant for the United States Air Force Dependent Schools in Germany. In North Carolina Mr. Rhinehart has coordinated the Waynesville, NC summer reading program and has also served as a reading consultant to the Charlotte City Schools. He has also returned to Appalachian State University as a visiting Assistant Professor for two summers in the Reich College of Education and also served as the President of Appalachian State University's Belk Library Advisory Board.

Because of his expertise and outstanding dedication to education and communities, Mr. Rhinehart has been the recipient of numerous honors and awards. These awards include:

Maureen Rhinehart recently retired from her career as a fifth grade classroom teacher at the Robbins Lane Elementary School in Syosset, New York. In addition to her work in the classroom, Mrs. Rhinehart has made significant contributions to the school as well as the Syosset Central School District. She was instrumental in the adoption of a new curriculum in science and written composition, and for many years served as one of the coordinators and trainers for the administration and scoring of the NYS Writing Test. Maureen Rhinehart demonstrated devotion to her classroom in many ways, including the successful planning and oversight of the first overnight trip to Philadelphia for Robbins Lane Elementary fifth graders. In June 1999, Mrs. Rhinehart was awarded the New York State PTA Distinguished Service Award for the second time in her career, a most unusual accomplishment.

The Rhineharts are also members of the 1899 Legacy Society at Appalachian State University as a result of their inclusion of the University in their estate plans. Above and beyond any regular giving habits, this action demonstrates extraordinary commitment to the University and exceptional faith in the future of an educated people.